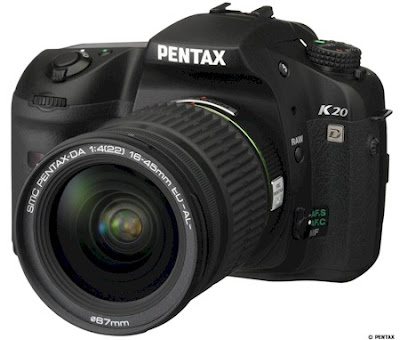 Pentax has lowered the price of its flagship digital SLR and waterproof compact camera.

The Pentax K20D, initially launched at $1,299 (body only), comes down to a body-only price of $999. The K20D features a 14-megapixel image sensor developed for Pentax by Samsung. The K20D offers a 2.7-inch LCD display with 230,000-dot resolution and a live-view mode. It has the ability to make custom adjustments to five scene modes within the camera, including adjustments to saturation, hue, contrast and sharpness. It is offers ISO 6,400, a CCD-shifting image stabilization system, an 11-point autofocus and 16 segment metering. It is capable of continuous shooting at 2.8 fps to 38 high-resolution JPEG images or 16 RAW files (in the DNG format).

The Optio W60, originally $329, will be reduced to a suggested $299 price. It is waterproof up to 13 feet and can remain submerged for up to two hours. It has a 5x optical zoom lens (28mm to 140mm, 35mm equiv.), a 2.5-inch display and can also be used in sub-zero temperatures. The W60 can record HD video at 1,280 by 720 resolution and offers a face-detection mode capable of recognizing up to 32 faces in a frame in 0.03 seconds. A smile-capture mode will only record an image when a subject is smiling while blink detection will warn consumers when a subject’s eyes are closed. The camera also features an auto picture mode, which automatically selects one of seven scene modes that best fit the shooting environment, along with 36MB of internal memory, panorama stitching and ISO 6,400. (info from TWICE)