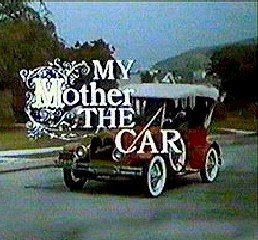 My Mother the Car was an NBC TV sitcom on the air in the 1965-66 season. TV Guide proclaimed it to be the second-worst TV show of all time, just behind The Jerry Springer Show.

The show followed the life of David Crabtree (played by Jerry Van Dyke), who, while shopping at a used car lot for a station wagon, instead bought a ratty 1928 "Porter."

Crabtree heard the car call his name in a woman's voice which turned out to be that of his deceased mother Gladys (voiced by Ann Sothern). The car was a reincarnation of his mother who talked (only to Crabtree) through the car's radio. The dial light flashed in sequence with "Mother's" voice.

Anyway, starting in 2002, Ford will be updating the '28 Porter with some electronic parenting in the form af a computer chip. It can keep your kids from driving over 80MPH, keep them from blasting the stereo, and make an annoying sound if they don't buckle up.

"Our message to parents is, hey, we are providing you some conditions to give your new drivers that may allow you to feel a little more comfortable in giving them the car more often," said Jim Buczkowski, Ford's director of electronic and electrical systems engineering.

The feature, called "MyKey," will be standard on some Ford models when the 2010 cars and trucks come out late next summer. The feature will spread to the entire Ford, Lincoln and Mercury lineup as models are updated.

The company already uses computer chips in its keys to prevent thefts. The car won't start unless it recognizes the chip in the key. "It's making use of existing technology, and through the magic of software, we're able to build features on top of the features we already have," Buczkowski said.

In addition to speed limits, MyKey also will limit the volume of the audio system, and it will sound a six-second chime every minute if seat belts are not fastened. The chime sounds for adult drivers, too, but ends after five minutes to avoid annoying adults who adamantly don't want to wear seat belts, Buczkowski said.

Parents also have the option of having the car sound a chime if the teen exceeds 45, 55 or 65 mph. The feature will debut on the 2010 Focus compact car and quickly move to other company models as a standard feature.

Ford said its market research shows 75 percent of parents like the speed and audio limits, but as you might expect, 67 percent of teens don't like them.

Ford's research shows that parents would be more likely to let teens use their vehicles with the system, Sherwood said, and if it gets them the car more often, the number of teens objecting drops by nearly half.

Several US. auto insurers have begun offering in-car cameras or global positioning equipment to help parents monitor their teens' driving behavior, in the hope of reducing the number of crashes. (info from The Associated Press & Wikipedia)