A good reason to become a cop in Italy 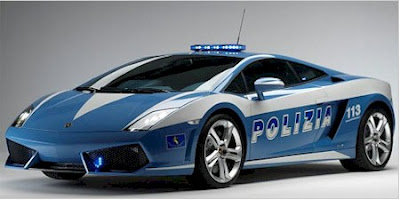 The gift from Lamborghini, in blue and white and marked with the word "Polizia", has a top speed of 192mph. It should have the edge in any chase on the Salerno-Reggio Calabria motorway. However, the car is just as likely to be used for emergency deliveries such as human organs for transplant.

The sleek two-seater, topped with a flashing blue light, has a six-speed tranny and a 500-horsepower engine designed to make the Lambo go from zero to 60mph in four seconds.

Donated by the Lamborghini factory in Bologna, its list price is $165,000, making it unlikely that the Italian police force will actually buy any. (info from the BBC)