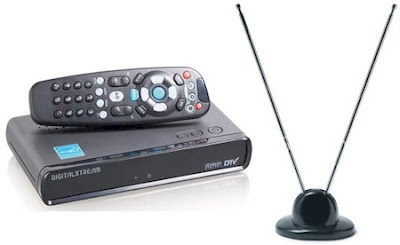 My parents have cable TV in three rooms of their condominium home in Florida. They also have a TV in their kitchen. Unfortunately, the kitchen was not pre-wired for TV diring construction. And like most Florida homes, their home has no basement; and another family lives above them. It would have been difficult and messy to snake cable from another room to the kitchen, so for 15 years they've been using rabbit ears in the kitchen and settled for shittty reception, on just a few channels.

The arrival of digital television (DTV) has made a big change.

I got them a $40 coupon from the Feds, which they used toward the purchase of a $60 DTV converter from RadioShack, and the improvement is absolutely amazing. With no upgrade in antenna and no effort to aim it for optimum reception, they are getting about 20 channels in crystal-clear, perfect color.

The transition to digital television is happening on February 17, 2009, so if you or anyone you know is still dependent on regular terrestrial TV broadcasters (not cable or satellite or phone company TV service), and you or they don't have a TV that was built to receive digital signals, you'll need a box like this.

I normally don't review low-tech stuff, but I was so impressed with the results, I thought I'd tell you about it. The model is the Digital Stream DTX9950. It has a decent remote control that handles both TV and converter functions, but there is no channel display on the box. There are other similar boxes from other sources that are probably just as good, and may have fancier features.

Dear Fellow Americans: We live in the Yuha Desert in Ocotillo, Ca. Our community is representative of thousands of rural towns that will be placed in danger this February and we need help before that fatal end comes. Please help save our communities from the eminent danger that DTV (digital television conversion of over the air waves) is imposing upon us. We receive good analog signals but the digital signals do not reach us even with outdoor antenna,signal boosters, and converter boxes. The digital signal simply requires more signal to form a picture than does the analog. We fringe area rural folks are without other means of weather warnings here on the desert. Cable companies and high speed internet providers were not required to serve us-hence we have none. WE WILL BE PLACED IN EMINENT DANGER when the analog TV is shut off in February (peak time of our rain season)., One third of our community was destroyed in a flash flood that ravaged our area. No one died thanks to TV weather warnings from Yuma, Az., via CBS and NBC. Before going out here folks check the weather warnings and take them seriously for our roads can disappear in minutes in sudden downpours! I have seen my own road here in town become a raging river in minutes. Flash floods on the desert are the norm. If the government shuts off our analog TV we will have NO weather warnings. We will be at the mercy of the forces of nature and our lives placed in jeopardy. We implore up, we beg you. we plead with readers to help us fight this shut off of our access to weather warnings and radar images that we are receiving at present via CBS and NBC from Yuma. Az. Yes, we have tried to get the digital signals-$1500 for "digital" TV that wasn't digital-had to buy converter box, outdoor antenna and mast, spliters and boosters and the digital signals are not strong enough to form a picture while very good analog signals are received. We feel that these air ways belong to we the people-all of us. That government is but the custodian of these waves: and that by placing someone is harms way by denial of TV signals necessary for life, shall be looked upon by the world as an unjust, unacceptable, and a immoral act on the part of government that was instituted to protect us. With all the money spent on DTV commercials and buying NASCAR racers, transponders could have been built throughout rural America to insure signals for all. Please help to stop the February shutoff. Write your congressman on our behalf. Demand that the FCC stop this path to place our families and friends in a precarious position. Murder or just random killing of rural folks must never happen No American lifeline TV should ne shut off so that the pockets of broadcasters can be lined with gold. I thank you as do all the citizens of the great Yuha Desert and other rural areas of America about to be screwed.