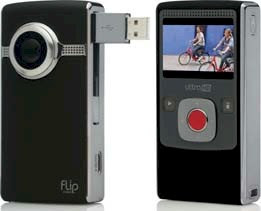 Yesterday Pure Digital Technologies introduced the second generation of its Flip Ultra camcorder line, both both standard- and high-def models.

The Flip UltraHD is available in black or white (with chrome trim), and has 1,280 by 720p HD resolution. It will capture up to two hours of recordings on its 8GB of built in memory and includes an HDMI output and 2x digital zoom.

The new Flip Ultra model is available in black, white, yellow and pink, and offers 640 by 480 standard-definition resolution. It records up to two hours on its 4GB of built-in memory, and includes a composite-video output and 2x digital zoom.

The new models are preloaded with FlipShare onboard video editing, filing and sharing software. The system enables fast file sharing after plugging the camcorder’s USB arm into a Mac or PC.

Pure Digital said it sold more than 2 million units since the introduction of the first Flip Family camcorders about two years ago. The company also claims that its Flip Ultra is No. 1-selling camcorder in the US, and its Flip MinoHD, launched last November, is currently the top-selling HD camcorder in the country. (info from TWICE)