Even if you did't care about Star Trek on TV, you'll probably still like the movie 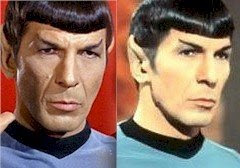 Before the release of the new Star Trek "prequel" movie, there was some loud grumbling from diehard fans who feared that it would be untrue to the original.

I can't imagine any real ST fan not liking the movie, and there's a lot that will appeal to "kids" who were born too late to miss out on the original fun. My wife, who never watched any of the TV shows, and grumbled through the movies she went to with me, actually had a very good time. I was never a Trekkie or Trekker. I never went to a Star Trek convention. I never wore Kirk pajamas or Spock ears, but I did see every movie and every episode of every TV series. I could not imagine not going on opening day, and I loved the movie.

I thought that the cast was mostly unknowns, but Generation-Xer Cousin Dave pointed out that if I was 15 to 25 years old, I would recognize them as current stars. The producers were smart to pick a theme that would appeal to my generation, and have a cast that would appeal to kids.

Zachary Quinto (above, right) looks so Spock-like that he could be the original Nimoy's son, or the current Nimoy's grandson. We even get to see the present Quinto-Spock talking to the future Nimoy-Spock. At the end of the conversation they both give the Vulcan/Jewish spread finger salute. My wife said that she read that Quinto's fingers had to be temporaily glued together to do the stunt, but the glue didn't show. As Nimoy-Spock was about to leave Quinto-Spock he said something like, "It would be self-serving to use the traditional farewell, so I'll just say good luck;" meaning it would be wrong to say "live long and prosper" to himself.

I went to a 6:30 screening, that had a mix of old farts like me and young families with kids. A few seats away from me was a bearded guy of approximately my age (63). At several points in the movie where there were homages to the original STs, it seemed that he and I were the only ones in the theater who were laughing or applauding.

This happened the first time Quinto-Spock raised his eybrow, and when Bones said, "Damn it Jim, I'm a doctor, not a..." and when Scotty said, "I'm givin' 'er all she's got, Cap'n." I did not hear "I canna change the laws of physics" or "He's dead, Jim, dead," but I'll likely see it again and will listen closely.

Early in the movie we see Kirk at around age 12 speeding in an ancient Corvette. While driving he raises the top so it can be blown off the car and heads for a cliff while being chased by a cop in a flying motorcycle. Kirk leaps out just in time and as he crawls back up from the abyss, the cop asks his name. Is a squeeky kid voice, he replies, "James Tiberias Kirk." It was as assertive as "Bond, James Bond." A few years later Kirk shows up at Starfleet Academy and gives away his futuristic motorcycle before heading off into space.

Kirk soon tries and fails to pick up Space Cadet Uhura in a bar. Later she is hot for Spock, and Spock and Uhura have a passionate goodbye while standing in the transporter bay, as Kirk watches them.

Kirk has a sex scene with a green woman, and when her roommate arrives he hides under her bed, but the second woman tells the green woman that she hears him breathing, and Kirk runs out of the bedroom in his undies.

There's an early scene where Kirk meets Dr. McCoy. McCoy warns Kirk about the dangers of space and explains that he just lost everything in a divorce. All he has left are his "bones."

Because of his "cheating" manipulation of the Kobayashi Maru test, Kirk is suspended from Starfleet and not allowed to go into space on an emergency mission. Bones comes up with a faked excuse to take him on board the Enterprise, allegedly because Kirk needs his medical attention.

When Spock is acting-captain of the Enterprise, Kirk pisses him off, and Spock maroons him on a frigid planet. Kirk is chased by a monster and seeks refuge in a cave and is saved by Nimoy-Spock, who gives him an update on Vulcan/Romulan history. Nimoy-Spock takes Kirk to a Federation research station where he meets super-geek Scotty. Nimoy-Spock gives Scotty advice on modifying the transport equipment so Scotty and Kirk can be transported to the Enterprise whle the ship is moving at Warp speed. The arrival on Enterprise is very funny, with Scotty trapped. (I won't spoil it for you by explaining it.) Quinto-Spock is pissed off to see Kirk again. They get into a fight. Spock realizes that his emotional ourburst shows that he is unfit for duty, and Kirk takes over as Captain to fight the Romulans.

McCoy had a great line to Spock: "Are you Vulcan crazy?"

At the end we see Captain Pike in a wheelchair, a precurser of the Pike head mounted on a mobile box in the original series.

The conclusion has Nimoy reciting, over the original theme music, "These are the voyages of the Star Ship Enterprise..."

I can be emotional and loud in movie theaters, and my wife often cringes. Sometimes during a really preposterous scene I'll yell BULLSHIT, as in the original Batman movie when an airplane was brought down with a shot from a handgun.

Long before Gene Roddenberry, British writer Samuel Talyor Coleridge (1772-1834) wrote that a "willing suspension of disbelief" is necessary to enjoy art and literature. I was unable to suspend disbelief to accept shooting down the plane, but I had no problem with the new ST movie plot line happening before the TV series, and also happening in an alternate/parallel zone of existence so two Spocks could have a meeting.

Friday night, I had not even one negative outburst, and there was much to laugh and clap about.

I was pissed off that the melted butter didn't seep through to the lower third of my popcorn, but I can't complain at all about the actual movie. Based on the reviews, I expected it to be really good, but it was still better than expected. Purists may dislike the writers changing the Kobayashi Maru story line, but the new version worked out fine.

For me, most movies are a $10/90-minute nap. This time I stayed awake for all 2 hours and 6 minutes, and I'm now old enough for the Old Fart Discount.