New iPod is small enough to shove up your ass, and it speaks 14 languages. 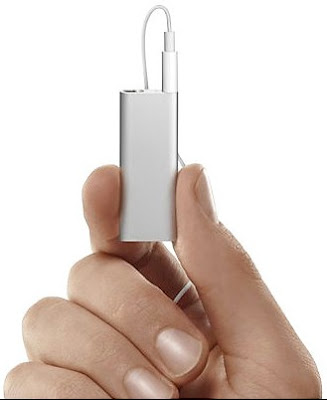 Yesterday Apple introduced their latest iPod shuffle (they spell it with a lower-case "s"). Apparently it's the world’s smallest music player at nearly half the size of the previous model. If you don't have to endure a cavity search, you can smuggle it into a prison.

It's also the first music player that talks to you.

The unit is smaller than a AA battery, holds up to 1,000 songs and all of the controls except the power switch are in a small pod on the earbud cord. With the press of a button, you can play, pause, adjust volume, switch playlists and hear the name of the song and artist. iPod shuffle has an aluminum case available in black or silver, with a built-in stainless steel clip that makes it easy to wear.

The iPod shuffle is based on Apple’s shuffle feature, which randomly selects songs from your music library. And when you can’t remember the name of a song or an artist playing, with the press of a button iPod shuffle tells you the name of the song and artist.

The tiny robot can even tell you status information, such as battery life. With the ability to hold up to 1,000 songs and the VoiceOver feature, you can now easily switch between multiple playlists on your iPod shuffle. iPod shuffle can speak 14 languages including English, Czech, Dutch, French, German, Greek, Italian, Japanese, Mandarin Chinese, Polish, Portuguese, Spanish, Swedish and Turkish.

It's said to have up to 10 hours of battery life.

The new third generation 4GB iPod shuffle is now available, with a suggested price of $79.This is a preview, not a review.

The 3rd generation Ipod Shuffle was released without much of a bang last week. I guess all the other mp3 players shuffle around the new Ipod Shuffle, LOL!